Obama voted for the FISA amendment.
I really liked his campaign and policies until he did this. Now I feel like I have to take a shower.

The quote on his campaign website is the most infuriating part.

“Given the choice between voting for an improved yet imperfect bill, and losing important surveillance tools, I’ve chosen to support the current compromise,” Obama said on his campaign Web site.

His use of “important surveillance tools” reeks of the Bush administration’s incredulous belief that violating civil liberties will actually stop a determined terrorist attack. 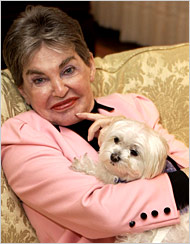 As reported in the New York Times, the vast majority of Leona Helmsley‘s $5B-$8B net worth will go to animal-related charities and trusts.

Even if the resulting total is at the low end of the estimate — $5 billion or so — the trust will be worth almost 10 times the combined assets of all 7,381 animal-related nonprofit groups reporting to the Internal Revenue Service in 2005.